It is the second GUADEC day meant for GUADEC developers. Fortunately this day started an hour later than the day before, so… that allowed for catching up some sleep.

We visited the following talks: 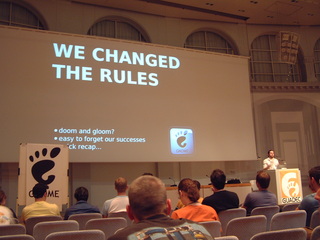 Then it was time for lunch. Actually it is a bit rainy this day, but I tried to hide that on the photos. :) We bumped into a small Italian lunchroom near the Haus der Wirtschaft and had some tasty sandwiches. 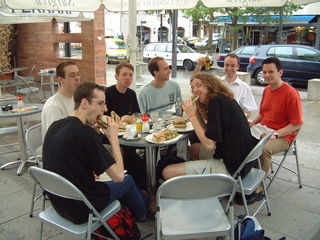 After the talks and lunch most of us engaged in a small hacking/fixing session. I (finally) met up with Martyn Russell and resolved some problems in Gossip and thought/discussed about/pondered some new UI things.

I accidently missed the conclusion talk(s) of Freeform sessions, but I hope I can find it to be recorded in the GUADEC 2005 (kudos to Fluendo for streaming most of GUADEC) archive soon.

We ate at the Hacienda (Tübinger Straße 8, Stuttgart), a Mexican restaurant. The food was very good, great atmosphere inside and even almost non-stop small shows and entertainment. Then it was time for the GUADEC party. I didn’t bring my camera with me, so I have no photos of the C64 style bar where it was held in.