My internships seems to have passed in an instance. I have been here in Edinburgh for almost three months already and it is time to prepare my return. It still feels kind of strange that everything happened so fast, though my arrival on December 1st 2005 seems ages ago.

Two weeks ago I came down with a cold. I have found it to be a rather strange cold. The symptoms were not always there, just sometimes. I had (all mixed) headaches, fever (during a cold?), losing of salt taste, losing my voice, sleeping badly, coughing without reason, sneezing and it took almost 10 days to recover which is kind of long for my doing IMO. People that I seem to have infected though, have “normal” cold symptoms.

As mentioned in a previous post I have received some visitors here. First my parents and then my friends came over. Together we have seen a lot. My aim was to show them as much of what I have been experiencing the past two months in the short period that they were here. I hope I was successful and all enjoyed themselves, at least I have.

The photos of when my parents were here and when my friends arrived are available in my Edinburgh album. However, during the visit of my friends, Christian made photos with a far better camera and I have put them in a separate sub-album (see also his own album).

Last weekend I also visited my friends in London. I can’t just be in the UK for three months and not visit them and join a party. 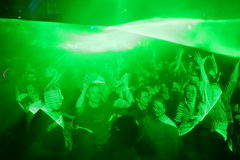 So, I planned the trip, bought flight and party tickets. Just before arrival I lost my voice. When I finally met my friends, I couldn’t talk to them at all. At the KnowWhere party it was even impossible to say anything. It was a funny experience to transfer things I wanted to say to them or order drinks using my mobile and T9 input in the SMS application. The party was great, but it completely wrecked my rhythm and prolonged my recovery.

Last week I started working on my internship report, since the end is near. I have about 10 days left to finish it and it is still a lot of work. I’ve found it to be quite a challenge still, to say exactly what you want to say without cluttering it and in the right order so that it is understandable. Considering that I have written many many reports for my study in the past, I still want to make this one the best.