I safely arrived in Istanbul yesterday. The trip went well, only it took some effort to get into the country. There was a huge queue at the passport checkpoint which was advancing very slowly. Then, when I finally was at the desk, the guy told me to get a visa first. Right, this is not Shengen, there is all this complicated stuff. So, I got in line for a visa. At the visa desk, the lady told me I could only pay in cash, in particular Euros and US dollars, nothing else. For the Netherlands, the Visa is € 10, which I left at home on purpose. So, I was directed to the ATM, where I got Turkish Lires, hoping they would suffice too, and they did. Back in the queue for the passport checkpoint, got through quickly. Next, the baggage. Because everyone is stuck at the passport checkpoint so long, almost nobody removes their baggage from the band. So, when 6 flights are assigned to that band your baggage will be dropped on, it will take a looong time. Also, it seems sometimes suitcases “drop off” in the corners of the band and moved to “some location”. When Amsterdam dropped of the board, I was worried, but I found my suitcase at “the location”. Finally we boarded the shuttle to the hotel and arrived there over 2,5 hour later. We had a nice walk and very good dinner (not for Sjoerd though). Just to prove I’m really here (info): 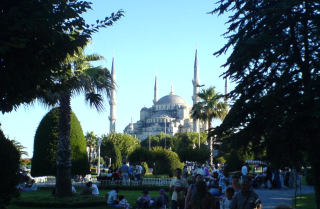 Now, on to some sight-seeing!