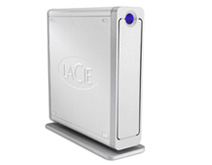 The LaCie disk I had ordered, arrived last weekend and besides some testing I finally got to use it today. I had to go with the Firewire option because my PowerBook still has USB 1.1 only and well… 1MB/s just doesn’t cut it for me and FireWire is nice.

Using FireWire 800 with a PowerMac G5 I was able to reach 45MB/s average. On my PowerBook using plain FireWire (400) I have been able to get 22MB/s sustained. Since my laptop harddisk can’t go any faster, I am quite satisfied. :)

The whole thing was a nice test for my 2.6.10 kernel too. I have partitioned the disk with one partition for Video and Music storage and one for backups (24 homedir backups ought to be enough for everybody). I plugged in the LaCie disk, all USB storages devices I have and got a nice result presented by nautilus with the help of Gnome Volume Manager and HAL.

I’m still having a bit of problems though. Sometimes the SBP2 subsystem seems to act up and the disk becomes unreachable:

Turning if on and off or letting it timeout helps, but that’s not A Real Solution™. So I’ll still have to figure this out and fix it.