The Hogmanay celebration in Edinburgh started on December 29. This was coincidentally on the same day as my meeting with Steve Kemp, a fellow Debian developer. We had a nice chat and a huge and tasteful hot chocolate in a coffee shop on Nicolson Street. After our meet we ran into the Torchlight procession, Edinburgh’s Hogmanay first event. There seemed to be no end to the procession. I was cold, my feet were hurting, so I caught a bus home and missed out on the fireworks. 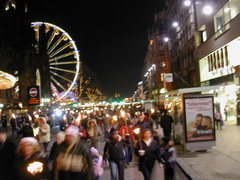 On New Year’s Eve I took the last bus to the city centre (around 21:00). It was still raining a bit, but fortunately it had completely cleared up once I got out of the bus. There, I witnessed the start of the Royal Bank Street Party (consisting of concerts, a carnival, attractions, etc.), which meant thousands, ten thousands of people gathering to enter the party. This party was held in a closed down perimeter covering Princes Street and other adjacent streets. Since I had no ticket I made a walk around the perimeter to get a glimpse of the party itself but also to see what else was going on in the centre. It turned out that there were lots of ticket-less people who were partying in pubs or just singing and dancing on the streets. 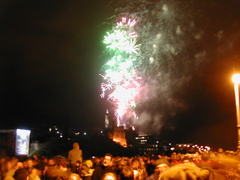 At 23:30, lots of people (including me) gathered on the North Bridge to wait for the 0:00 moment. At midnight loud yelling rose from the centre evolving into a load roar as if legions of men were sent to war and the Seven Hills Fireworks were set of. Everyone was cheering, jumping in the arms of strangers and wishing everyone a good and happy new year. It was an amazing thing to experience and be part of :), I hope that I can come back for it once more.

A happy and good new year everyone!